Xocaro.io is a variation on the theme of logical games, where you need to put several characters in a row. In this game, you need to beat the opponent by combining 5 of your icons! Perhaps you know this game under the name Gomoku.

A game goal in Xocaro.io is to put 5 of your characters in a row. The first one who does this will win! In this case, you can put symbols both vertically and horizontally; the main thing is that there are five of them. In addition, there are two simple rules

1. The icons in the line should be exactly 5 and not more than 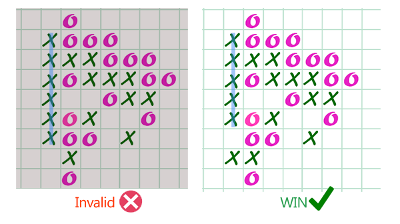 2. A line of 5 signs should not be blocked by opponents from either end 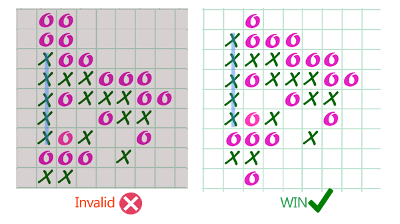 The special value of this game is that you can play it from your Facebook account. This means that you can brag about which of your acquaintances you have defeated in Xocaro.io, and also to share reports about your rating. And here, a good set of skins is given right away and free of charge. You can specify a couple of simple tricks that will make your game stronger. First, try to put the symbols close to each other. This means that the next steps you can attack on several lines. The second rule in Xocaro.io is this: most often the winner is the one who imposed the position of the defender on the opponent. To do this, you need the first to put 3 characters in a row. If the enemy does not block you from any side, then, having laid out the 4th symbol, you will secure a victory for the next turn (most likely). This means that the enemy will be obliged to block you from one side at a time when you have 3 symbols on the field. Thus, over and over again placing the opponent in danger of laying out the 4th symbol, you force the opponent to block your moves from one side. This leads to the fact that the symbols of the enemy will be scattered here and there on the edge of the battle, while you can concentrate your pieces in the center. Good luck!

Control in Xocaro.io and Click to put the symbol